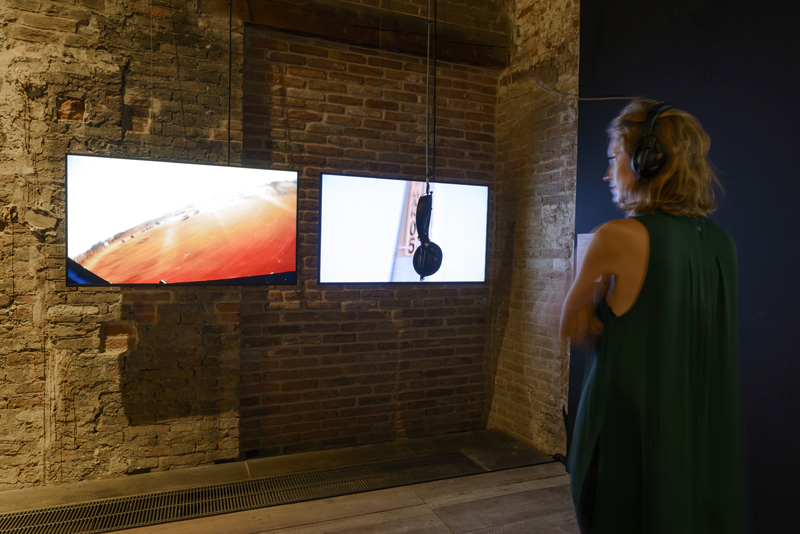 Marikana Viewpoints: Most of You Will be Listening
2013/14
Found video with sound design, duration 4 min 17 sec
Courtesy the artist

These videos were made from secretly obtained video footage of the incident know as the Marikana Massacre—‘the single most lethal use of force by South African security forces against civilians since1960.’

This event—on 16 August 2012—was a turning point in the history of post-apartheid South Africa, and a reflection of the reckless attitude the Zuma administration has towards the people of the country. The culture of violence that began at Marikana has seen a crisis in leadership and a worrying decay in democratic principles. (As this text is being written, thousands are marching for a peaceful resolution to xenophobic attacks on foreigners in the Durban area of KwaZulu-Natal.) Against Civilians presents an aerial viewpoint during the massacre. Most of You Will be Listening is an uncut walk though the twilight of the aftermath, over which we hear the voice of South Africa’s first female national police commissioner, Riah Phiyega, recorded during a lecture to the police after the massacre, in which she quietly congratulates them for their part in theevents.

Warrick Sony is a composer, sound designer and audio artist working out of Milestone Studios in Cape Town. He has produced a body of work dating back to the eighties, centred largely around an interest in propaganda and the technologies that repressive regimes adopt to control their populations. He is the founder and sole permanent member of the Kalahari Surfers, a fictional music collective especially active during the mid to late eighties, which has produced politically acute music albums, art projects and live shows. He was one of the first South African musicians to tour in the Eastern Bloc, with concerts in the former Soviet Union and East Germany. During the nineties, his collaborative work included music and a tour of Brazil with Sowetan poet Lesego Rampolokeng, and music/sound design for the Handspring Puppet Company/William Kentridge productions of Ubu and the Truth Commission and Faustus in Africa, and Kentridge’s film Johannesburg 2nd Greatest City after Paris. Recent work includes two video installations for Ngezinyawo—Migrant Journeys at the Wits Art Museum, Johannesburg, and the music for Turbulence, the South African exhibition in the Red Bull Hangar 7 event inSalzburg.

Sony has performed at three of the Unyazi Electronic Music Festivals. His album Unoriginal Inhabitants was released in May 2015. His film scores include Jozi (directed by Craig Freimond) and In My Country (directed by John Boorman), co-composed  with Murray Anderson. Sony runs a digital download music site called sjambokmusic.com, which specialises in eclectic South African music. His greatest regret is being passed over as Minister of Disinformation for the first post-apartheid government.