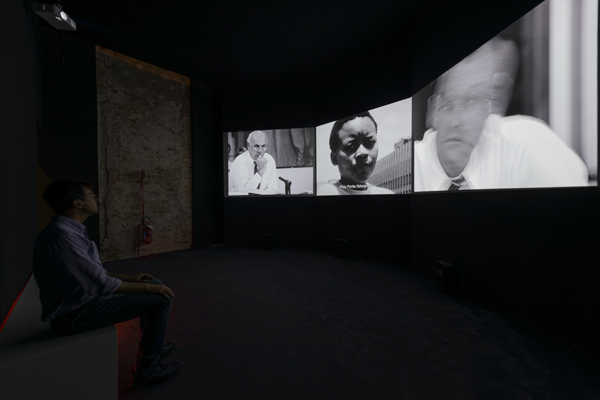 Next to Nelson Mandela, the Truth and Reconciliation Commission (TRC) is arguably the thing that the world most admires about South Africa’s transition to democracy. Since the Apartheid Museum in Johannesburg opened its doors in 2001, it has reserved a space for an exhibit on the TRC. Telling the Truth?, commissioned by the museum, occupies the heart of this space. The installation is viewed at the end of a journey through the other exhibits in the museum—which present a chronology of the rise and fall of apartheid—when the visitor is both physically and emotionally tired from what they have looked at. Viewing it is like visiting the TRC but witnessing only a fragment of the whole. In this fragment we get a sense of the epic nature of the undertaking, even though we can ascertain no beginning, no fixed end and no coherent order ofevents.

With a few exceptions, all the images were recorded during the amnesty hearings of the TRC. (Amnesty was granted for politically motivated human rights abuses, provided the perpetrators confessed to their crimes.) On one screen is a person testifying. On the other two screens are texts and images that speak to what we are hearing from the victim, the perpetrator or those listening to the testimony. We are watching conversations or confrontations as though we have entered the room, as though it were possible to witness the telling, understand its import, and judge its terrible truth in the light of history.

Angus Gibson was a founding member of Free Filmmakers, a co-operative established in 1985 to create a relevant South African cinema. He joined the Junction Avenue Theatre Company in 1986 to workshop Sophiatown, a play about the destruction by the apartheid government of a mixed-race suburb in Johannesburg. With William Kentridge, he directed and edited Freedom Square and Back of the Moon for BBC Channel 4, and went on to edit Kentridge’s early films. In 1992 he directed 7 Up South Africa, documenting the lives and opinions of young South Africans. This won The Star Tonight Award for Best Feature Documentary. In 1994, he co-directed with Jo Menell the authorised biography, Mandela, Son of Africa, Father of a Nation, nominated for an Oscar and winning the Amnesty International Media Spotlight Award and the Pare Lorentz Award.

In 1997, he developed and co-directed the award-winning television youth drama series, Yizo Yizo, with Teboho Mahlatsi. His other projects include an installation for Hilton Judin’s exhibition, Blank, on the history of apartheid architecture; 14 Up South Africa, which won the Avanti Award for Best Feature Documentary; audio-visual installations for the Apartheid Museum, Johannesburg; and audio-visual elements for the Hector Pieterson Museum. Gibson was head of development and a director on the last series of Yizo Yizo, directed four of the Heartlines series, produced Zone 14, and, with Miguel Salazar, directed La Toma, a feature documentary in Colombia. He is a producer on the daily television drama Isibaya and directed 28 Up South Africa in 2013 with Jemma Jupp for Al Jazeera and ITV (nominated for a BAFTA). He designed Telling the Truth?, a permanent installation on South Africa’s Truth and Reconciliation Commission for the Apartheid Museum. He is a director of The Bomb Shelter film company, along with Desireé Markgraaff, Teboho Mahlatsi and Isaac Shongwe.