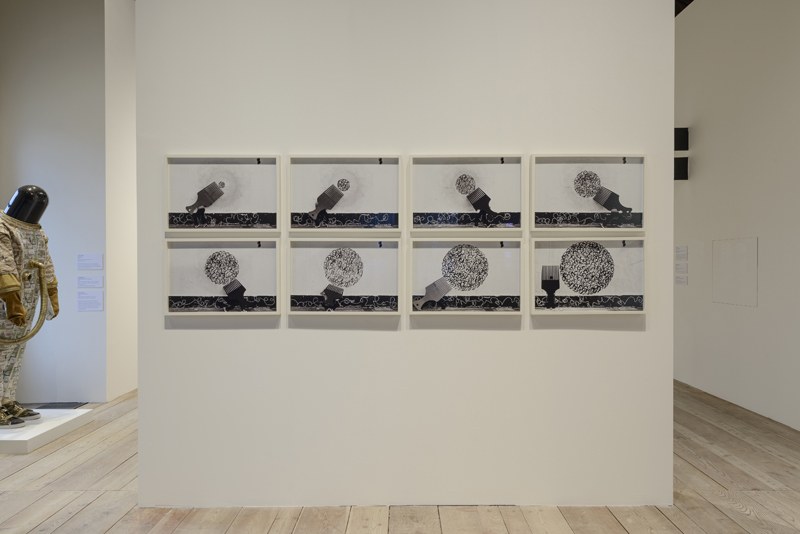 Rhode’s work, which incorporates film, photography, drawing and performance, frequently incorporates a gritty urban wall or sidewalk upon which the artist unfolds a story or image. The finished work is a dynamic representation—a human flipbook—of his bodily encounters with urban space, his street-level meditations on the world.

Blackness Blooms takes its title from a poem by the South African poet Don Mattera, a founding member of the Black Consciousness Movement and a member of the ANC Youth League. Mattera’s political activism led to a banning order, imprisonment and torture under the apartheid regime. Rhode was struck by Mattera’s imagery of incarceration: of darkness liquefied, of blackness as a terrible wound inflicted by others. As so often in his work, Rhode explores the many possibilities that an image presents to him, opening it out first as a series of lines or loops that extend from his own body, and then into a rapid-fire succession of figures in movement. Here, he takes Mattera’s dark imagery and, using a giant Afro comb, explodes it into a blossoming hairdo, a gorgeous celebration of blackness.

Robin Rhode was born in 1976 in Cape Town, and lives in Berlin. He completed postgraduate studies at the South African School of Film, Television and Dramatic Arts, Johannesburg, in 2000. Rhode’s dynamic, often playful, picaresque narratives, executed with everyday materials such as soap, charcoal, chalk and paint, are brought to life through stop-motion animation. In addition to the street art and performance aspects of his work, there is always a formalist foundation inspired by his interest in abstraction in general and Russian constructivism in particular.