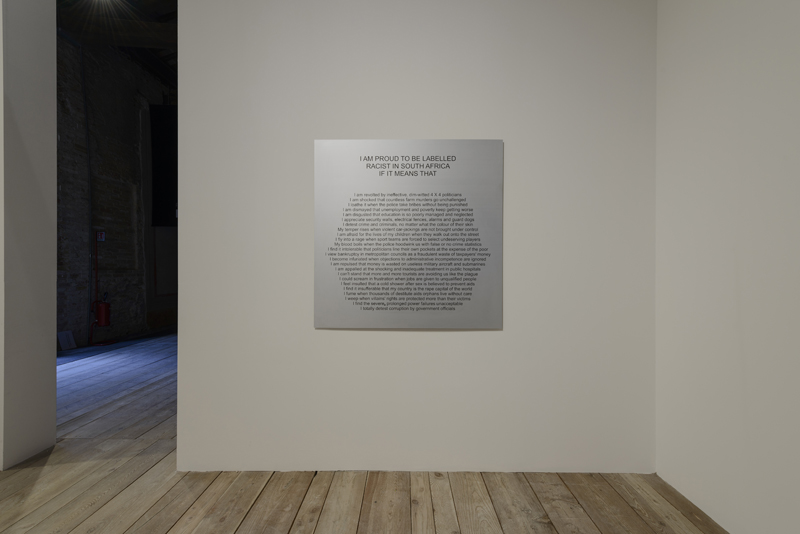 In 2012, a small crop of medals at the London Olympics placed South Africa 23rd on the medals table. In the same year, we were 9th on the list of countries with the most homicides—31 per 100 000. There are few South Africans unaffected by violent crime, and many, including me, have lost family or friends to murder. We have the worst rape statistics of any country—in 2010, only the USA, a country with a population six times larger, had more reported rapes than South Africa. The average South African girl stands a far better chance of being raped than of learning to read or write. I thought we were a democracy, but it turns out we are a veritable phallocracy. And to judge by the depth and seriousness of corruption in our government, we are also a kleptocracy—a country ruled by a gang of thieves. The idea of discrimination against others deeply offends me. But then, my artwork says I am proud to be labelled a racist, not that I am proud to be one. I and others have been labelled thus for objecting to the terrible crime wave that has our country in its grip.

Willem Boshoff was born in 1951 and grew up in Vanderbijlpark, south of Johannesburg. He lives and works in Johannesburg. His father was a carpenter and Boshoff grew up with a love for wood and a respect for technical expertise. He decided not to exhibit his artwork in a public gallery until he was thirty years old, when he had his first exhibition at the Johannesburg Art Gallery. His major works include KYKAFRIKAANS, an anthology of concrete poetry (1980), Blind Alphabet (1995), Writing in the Sand (2001) and Garden of Words (in progress since 1982). His work has been shown in South Africa and internationally, notably at the Johannesburg, São Paulo, Venice and Havana biennales; the National Museum of African Art at the Smithsonian Institution, Washington, DC; the Triennale für Kleinplastik in Stuttgart (where he was awarded the Ludwig Gies Prize); Museo Nacional Centro de Arte Reina Sofia, Madrid; the Museum Boijmans van Beuningen, Rotterdam; White Box Gallery, New York; Museum van Hedendaagse Kunst, Antwerp; Galerie Asbæk, Copenhagen; Sonsbeek Internationaal, Arnhem; and Art Unlimited at the Basel Art Fair. He won a Golden Loerie in cooperation with Ogilvie International for his artwork Abamfusa Lawula (1997). Boshoff was head of the Department of Fine Art of the Technikon Witwatersrand (now University of Johannesburg) and has an honorary doctorate from the University of Johannesburg. He has delivered lectures on the interaction of the visual and audio arts at various universities and has published numerous essays and articles. He has an extensive collection of avant-garde music, Gregorian chant and ethnic music and spends much of his time compiling dictionaries (his first, A Dictionary of Colour, was written in 1977). He regularly visits major gardens in the world to do research for his Garden of Words and Big Druid projects. 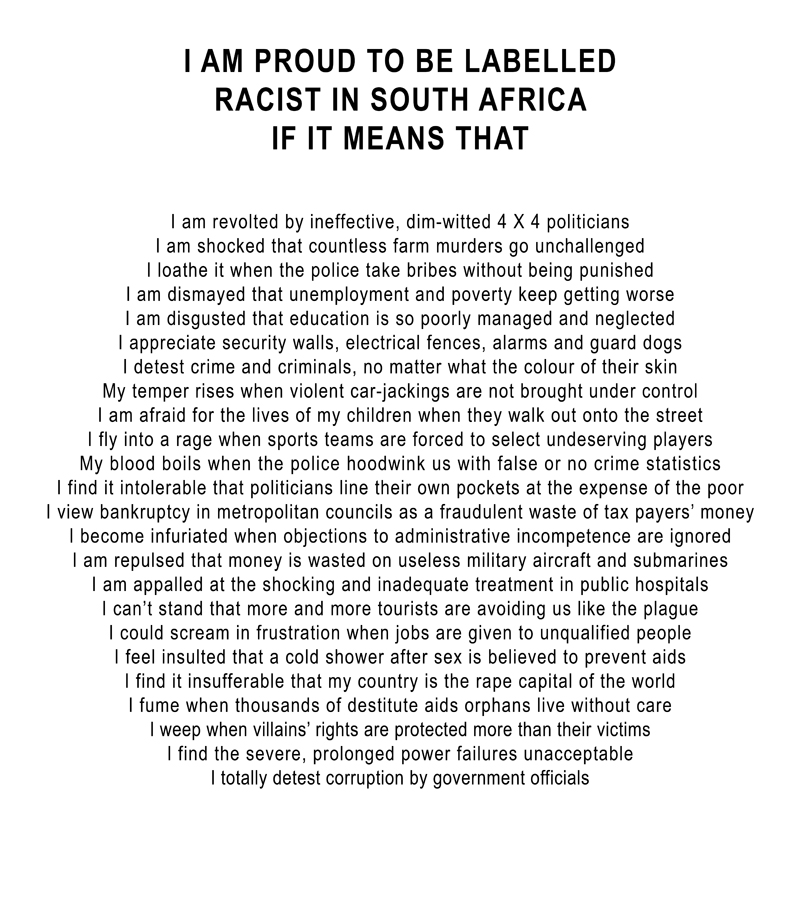