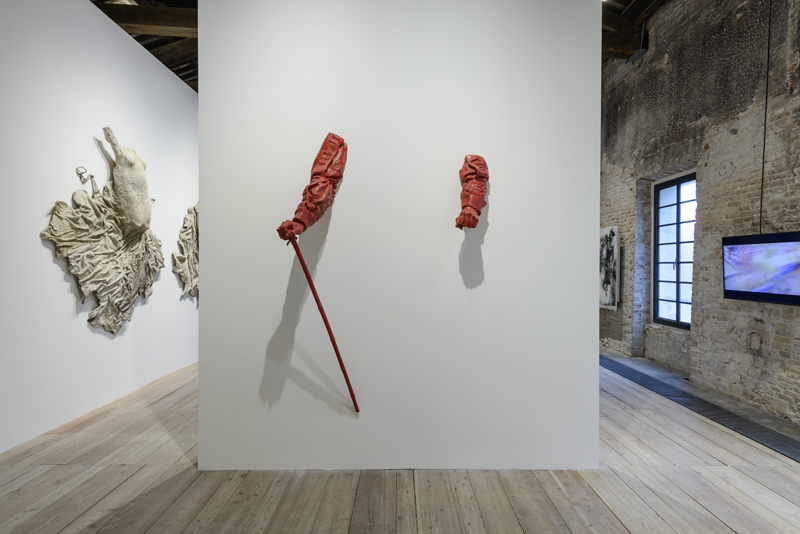 Under the 1968 Group Areas Act, the people of District Six in Cape Town were forcibly removed from their neighbourhood by the apartheid state in the 1970s. The area was renamed ‘Zonnebloem’ (sunflower), which remains its official name. In 2013, Gunn-Salie staged the site-specific work Zonnebloem Renamed in which he altered the ‘Zonnebloem’ road signs to read ‘District Six’. For Gunn-Salie, District Six is both a place and an idea and his work is an attempt to challenge the apartheid and colonial heritage that dominates public memory in Cape Town and in South Africa.

As an implicit extension of this project, Gunn-Salie now presents Soft Vengeance for the South African pavilion of the 56th Venice Biennale. In this ongoing series of sculptural works, Gunn-Salie draws attention to the lack of transformation of educational institutions and other public spaces in South Africa. Racism and the effects of apartheid persist, and the colonial legacy is reflected in symbols that dominate and define the urban landscape, and by extension, the mindset of South Africans. Nelson Mandela’s negotiated settlement of 1994, and the subsequent Truth and Reconciliation Commission, have meant that many things have continued as before for most South Africans, and that symbols of the colonial past remain precisely where they have always been.

Following a month-long, student-led movement at the University of Cape Town, a statue of British colonialist Cecil John Rhodes was removed from the campus on 9 April 2015. In the weeks following this protest, other memorials throughout the country were defaced with coloured enamel paint.

Soft Vengeance presents the blood-stained hands of Jan Van Riebeeck, cast directly from a statue of the Dutch colonist in Adderley Street in the city of Cape Town. The rest of his form is a ghosted presence, unseen beyond the drywall. The dismembered hands, the first of several similar works, will serve as an appropriation and a rearticulating of disquieting symbols of power, and a reflection on what their legacy has engendered.

Haroon Gunn-Salie was born in 1989 in Cape Town, and is currently based between Cape Town and Johannesburg. He completed his BA Honours in sculpture at the University of Cape Town’s Michaelis School of Fine Art in 2012. Gunn-Salie’s collaborative art practice translates community oral histories into artistic interventions and installations. He utilises a variety of mediums and he is particularly concerned with forms of collaboration in art that are based on dialogue and exchange.

Gunn-Salie’s MA graduate exhibition, Witness, was a site-specific work focusing on forced removals under apartheid. To create Witness, he worked with veteran residents of District Six, an area in central Cape Town where widespread forced removals occurred under the apartheid regime. In 2013, Gunn-Salie exhibited on group exhibitions at the AVA Gallery in Cape Town, Stevenson, Cape Town, and the Goodman Gallery in Johannesburg. In 2010 he won the Barbara Fairhead Prize for Social Responsibility in Art at the University of Cape Town and in 2013 was a merit award winner in the Sasol New Signaturescompetition.