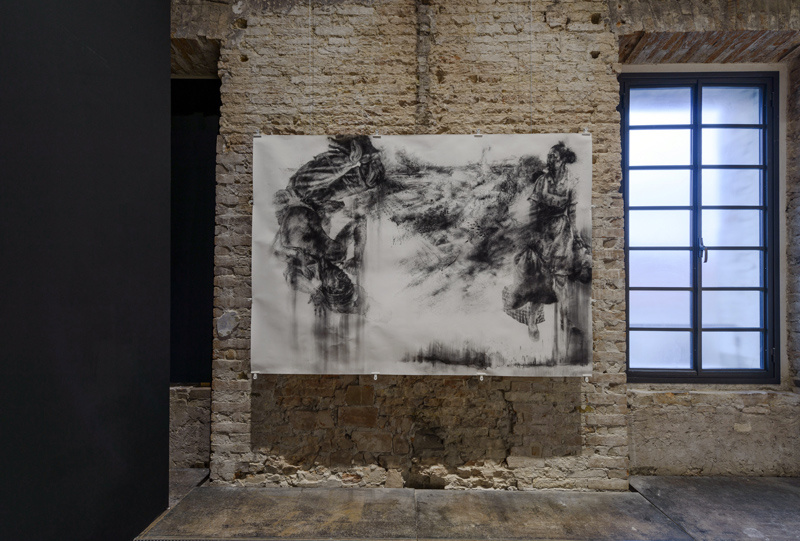 Victor’s ash drawings are a natural progression from her earlier smoke drawings. Both mediums produce ghostly images that seem about to dissolve or float off the whiteness of the paper. For her ash drawings, she makes use of the ash of a book that speaks to the image that she is creating, in this instance a miner’s handbook and a copy of the South African constitution. The ashes are reconstituted in order to ‘become’ the bodies of the subjects of the drawings. They are figures who have been swallowed by a landscape or by the state that asserts its ownership over the land, as in the case of the Marikana miners gunned down by the South African Police, or foreigners attacked and killed in xenophobic violence, or illegal migrants lost in the no man’s land between national borders. But they also emerge out of the burned or devastated landscape. The reference is clearly to death, to bodies broken and reduced to bones, but also to the phoenix, to re-emergence or uprising. In the moment of the drawing, Victor asserts the rights of her subjects to speak, to rise against the powers that have metaphorically pulverised or burned them into silence.

Diane Victor was born in Witbank, South Africa in 1964. She received a BAFA from the University of the Witwatersrand, majoring in printmaking. Her work explores, with extraordinary frankness and often unremitting close-up detail, the various ills of the society she lives in, especially its many forms of violence and abuse of power. Since 1987, she has participated in many local and international exhibitions, including Personal Effects: Power and Poetics in Contemporary South African Art, Museum for African Art, New York (2004); the Busan International Print Show (2007); the Krakow Print Triennial (2009); Peekaboo: Current South Africa, Tennis Palace Art Museum, Helsinki (2010); Collateral: Printmaking as Social Commentary, Gus Fisher Gallery, University of Auckland (2011); Impressions from South Africa: 1965 to Now, Museum of Modern Art, New York; Earth Matters, National Museum of African Art, Smithsonian Institution, Washington, DC (2013); and Nomad Bodies, Artesis Plantijn University College, Antwerp (2014).