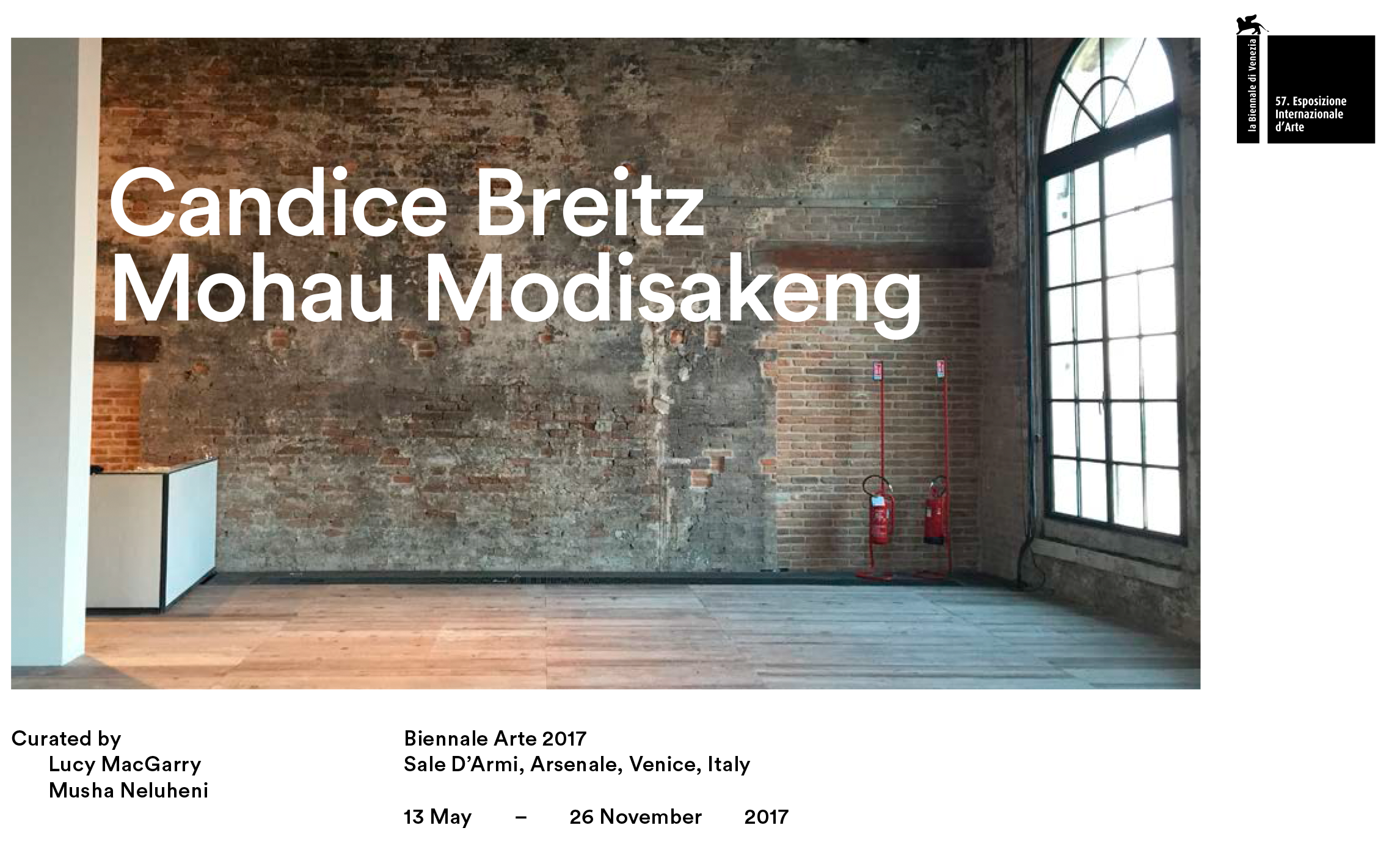 This exhibition will be the first La Biennale di Venezia project presented by Connect Channel.[/one_half]

[one_half_last padding=”0px 00px 0px 20px”]
Christine Macel, Artistic Director of the 57th International Art Exhibition, has outlined a curatorial framework emphasising the important role artists play in inventing their own universes and injecting generous vitality into the world we live in. In response to the Exhibition’s theme, The South African Pavilion’s exhibition will invite viewers to explore the artist’s role in visualising and articulating the notion of selfhood within a context of global marginalisation. What is it to be visible in everyday life, yet invisible and disregarded at the level of cultural, political or economic representation? Placing new works by Breitz and Modisakeng in dialogue, the exhibition will reflect on experiences of exclusion, displacement, transience, imigration and xenophobia, exploring the complex sociopolitical forces that shape the performance of selfhood under such conditions.[/one_half_last]

“The team we have assembled brings together Connect as an experienced local production company, accomplished curators and a proven project management company with first-hand experience of the Biennale. Our collective goal is to spearhead a new approach to The South African Pavilion in 2017 by presenting the work of two leading, South African artists and to leverage social and popular media to enhance local, public engagement with The South African Pavilion. We would like to thank the Department of Arts and Culture for the confidence they have shown in Connect.”– Connect CEO, Basetsana Kumalo[/full_width]

[one_half padding=”30px 00px 0px 00px”]
“We are truly thrilled that Breitz and Modisakeng will be representing South Africa. Breitz’s photographs and multi-channel video installations offer nuanced studies of the structure of identity under global capitalism, while Modisakeng employs a highly personal language to express ideas about his own identity and the body. This marks the first time that
Modisakeng and Breitz will be shown alongside each other in the context of a significant exhibition.” – Curator, Lucy MacGarry.

Connect has appointed Beathur Mgoza Baker to manage communications, host local events and leverage social and popular media to enhance public engagement with The South African Pavilion. As a company, Connect is engaged in improving access and exposure to the creative industries and reflecting local realities in the content they produce. Connect is confident that our country’s Pavilion at the 57th International Art Exhibition will be the best articulation and reflection of contemporary thought and visual art produced in South Africa today.[/one_half]

[one_half_last padding=”30px 00px 0px 20px”]Mohau Modisakeng is based in South Africa. His award winning and internationally exhibited photography, film, performance and installation work forms a personal and idiosyncratic exploration of a local narrative. Informed by a coming of age during our country’s violent political transition, his practice grapples with black male identity, body and place within a post-apartheid context. Modisakeng presents critical responses to ideas of nationhood, leadership, inequality and migrant labour that manifest visually as poignant moments of grieving and catharsis central to the current lived experience of contemporary South Africans.

Candice Breitz is an internationally acclaimed artist best known for her moving image installations. Throughout her career, she has explored the dynamics by means of which an individual becomes him or herself in relation to a larger community, be that community the immediate community that one encounters in family, or the real and imagined communities that are shaped not only by questions of national belonging, race, gender and religion, but also by the increasingly undeniable influence of mainstream media such as television, cinema and popular culture. Most recently, Breitz’s work has focused on the conditions under which empathy is produced, reflecting on a media-saturated global culture in which strong identification with fictional characters and celebrity figures runs parallel to widespread indifference to the plight of those facing real world adversities.[/one_half_last] 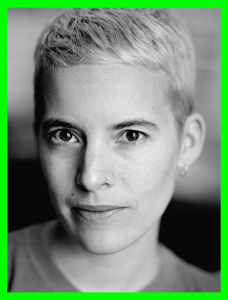 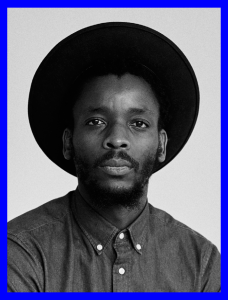 Connect Channel is a digital content and television production company managed by Basetsana Kumalo, one of South Africa’s most recognised personal brands and production veteran of over 20 years. Over the last three years the company has acquired a great deal of experience in producing television shows of cultural relevance to South African audiences. These shows have developed a loyal and dedicated viewership. Connect’s objective is to leverage off its production resources and know-how to engage with broader creative fields.[/one_third]

Lucy MacGarry served as Curator of the FNB Joburg Art Fair from 2014–2016. In 2015, she spearheaded the first dedicated programme of experimental film and live performance at the Fair. In 2016, MacGarry initiated and curated an inaugural East Africa Focus. The focus spotlighted artistic practice from Burundi, Kenya, Rwanda, Tanzania and Uganda to Ethiopia, Somalia and Sudan. From 2009–2014 she was Art Director of Yellowwoods Art overseeing the corporate art collections of Spier Wine Estate, Hollard Insurance and Nando’s Global. Musha Neluheni is currently Acting Chief Curator at the Johannesburg Art Gallery (JAG) and Curator for Contemporary Collections. Neluheni originates and oversees contemporary exhibitions at JAG as well as external exhibitions. She serves on the Standard Bank Visual Arts Committee and the University of Johannesburg Art Advisory Board. She worked as the assistant curator for the Sasol Art Collection from 2006–2009 and was awarded Young Curator of the Year for the 2008 Aardklop Arts Festival. She was the Educations Officer at the Johannesburg Art Gallery from 2010–2013. [/one_third]

Beathur Mgoza Baker is a seasoned South African content specialist, writer and art curator with a background in film, broadcast media and content design across Africa.

Parts & Labour is a multidisciplinary project management studio. They advise on large-scale sculptural projects, public art commissions, museum and art installations and specialist exhibitions to assist clients, artists, architects and designers in the development and realisation of their concepts. The projects Parts & Labour embarks on are by and large, out of the ordinary and defined by new techniques and structural experimentation such as ‘Release’ at the Nelson Mandela Capture Site. Parts & Labour managed the South African Pavilion at the 2015 Venice Biennale. [/one_third_last]

La Biennale di Venezia dates back to 1895, when the first International Art Exhibition was organised. It is one of the pre-eminent international bienniales and cultural institutions in the world, introducing hundreds of thousands of visitors to exciting new art every two years. The 57th International Art Exhibition of La Biennale di Venezia (13 May – 26 November 2017) is directed by Christine Macel, Chief Curator at the Musée national d’art moderne – Centre Pompidou in Paris.[/full_width]

For additional information about the artists and pavilion, or to request an interview please email: media@thesouthafricanpavilion.co.za